Another game to add to my 4X Turn Base strategy game collection would be Endless Legend. If you are not familiar with the 4X genre, it simply mean “Explore, Expand, Exploit, and Exterminate”; which was popularized by the title Civilization. Here is our full game review on Endless Legend.

Endless Legend was developed by Amplitude Studios and was published by Iceberg Interactive for Windows and Mac just last year; and follows the Endless titles with Endless Space (4X Genre) and Dungeon of  the Endless (Dungeon Crawl/Tower Defense Genre)

Moving forward, Endless Legend is an out of nowhere creativity twist. For me it almost like it came from a book or a movie. Regardless of which faction you choose; you are on Auriga fighting for survival. Although, like the numerous Civ titles, Endless Legend has different types of victory conditions. This includes score victory, elimination victory, expansion victory, economic victory, diplomatic victory, wonder victory, scientific victory, and supremacy victory. All factions has their own play and style as to what type of victory they could easily (faster) to attain.

Factions on the other hand includes, Ardent Mages, Broken Lords, Cultists, Drakken, Necrophages, Roving Clans, Vaulters, and Wild Walkers. The Wild Walkers are pretty much the most basic faction if you are looking to start the game to try. 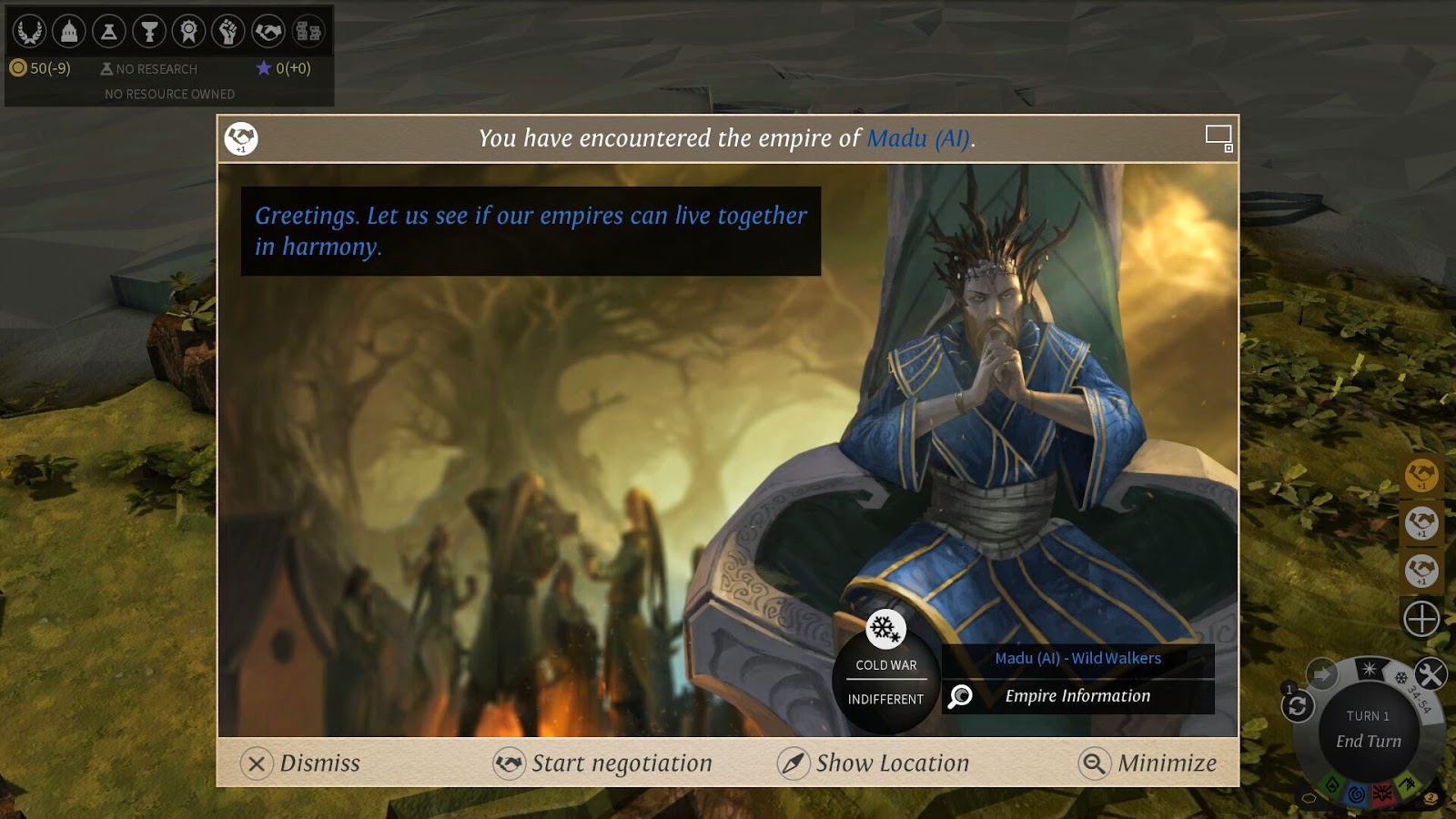 For the Game Mechanics, it’s pretty much straight forward. Choose a faction, jump into the game; and since experience is the best teacher, you have to crawl your way in understanding the whole game. I’ve come to reading forums for strategies, watching videos and digging in their wiki page. Much like a board game, better yet; much like Civilization, you have to understand how everything ties together; how other faction reacts to whatever you are doing; and how to counter options you might have on hand. Expansion will also be different; unlike Civ where you need a specific resource to expand your cities space; Endless Legend will require you to build a certain building to do this. It will require a lot of planning ahead of time, and looking into spaces where you start of you next city. There will also be minor factions which might help or halt your progress; they are much like barbarians in your land so better watch out for those.

It will require a lot of your time and patience. Especially if you are dealing with aggressive factions around your land mass. Watch out for the tech web progression though; although not complicated; decision to what you learn must be in line with your current situation; where do you to go as you progress; the enemies that you will be dealing with soon; and what and amount of resources you have near your capital. Heroes or special units are available as well to pump up your army; or to help you gain bonuses on your cities.

Moving into combat, this is where they go out of their way; you could opt to simulate everything; but for the fans it is best to go manual. With a combination of both Total War series all out war type of combat and Heroes Might and Magic grid base turn combat you will be amaze on how every piece of the game was well-thought of; the counter units are not blatantly set, so in some way you have to really think about how you would be composing your army to defend or conquer.

Imagine a small scale; turn base Dragon Age on a Civilization platform. You have your kingdom, you have your resources around the land. At the end of the day it’s up to you on how you would manage your kingdom and save the world. You could go full power; conquering all lands of Auriga, or be the diplomatic type adding the other factions on facebook. If you are greedy enough; concentrate on bringing in lots of coins and resources.

Graphically wise, it is surprisingly really good.  It might not show when you start the game, but in-game details is as good as it gets. Combat graphics are well taken care of; and in-game climate changes were also great. In this department, we would say that it was better drew than what Civ Beyond Earth has offered. Sound track was pretty much right; but again the graphics were great for this type of a game in this type of genre.

On the multiplayer side; unfortunately we have not tried it. But base on how challenging the AIs were at default difficulty, it might be better.

To cap it all off; Endless Legend is recommended if you’re a fan of the 4X genre. It does need 1 to 2 days of learning curve, but you’ll eventually get a hang of it. If you have not tried any 4X genre games; please do get this game. Again it needs a lot of your time and patience, don’t go breaking your PC once you’ve experience a loss; somewhere in your game their might be one flaw that you’ve made and you have to fix, be it the timing of your building and units or the use of your coins. Strategy and critical thinking is your best weapon for Endless Legend.

Graphics, audio, and gameplay all compliment each other. Other than that; it might be the lack of support from Amplitude studios for this game should be biggest let down. Certain points like difficulty needs to be adjusted; and some factions does not really do well which are just outright useless. Apart from those; the game is good and okay; you will be playing it once you bought it and maybe after a week you’re done with it; but after a month or two you might see yourself going at it again in Auriga.

Endless Legend is available on Steam for 869.95Php.

Ghost Games™, a studio of Electronic Arts Inc. (NASDAQ: EA) have announced Need for Speed™ Heat is available worldwide on the PlayStation®4, Xbox One...
Read more

Doraemon Story Of Seasons Now Out For The Nintendo Switch